We have been hard at work on our first novel unit- Tears of A Tiger by Sharon Draper.  This was an amazing and thought provoking book. Without spoiling it for you ( YOU MUST READ THIS BOOK) it is about a group of high school friends that see their lives change forever when one of them dies in a drinking and driving accident. The book follows the effects of this fateful night and in the end the driver, Andy, committed suicide because he could not live with the guilt. We were floored that he did this- better yet – we were angry and upset! This book brought many questions and issues up about teen drinking, suicide and friendships. Many of us have had friends die or be killed but no one we know has ever committed suicide. We discussed this a lot in our room and Ms. Bodanyi’s room as well.

This week Miss B choose a U2 song called “A Day Without Me” for our small class close read. At first listen we were stuck- the song had an upbeat tempo and we are not huge U2 fans! 🙂 After we received the lyrics it all began to fall into place- it was about suicide! We listened again and annotate to pull the meaning from the text. Here are some pics of that

By the end of the close read we were able to decipher that this song was not random as we first thought and that Miss B chose it because it goes with one of the theme of Tears of a Tiger !  We also discovered that the song -despite the tempo- was actually quite sad and about a person who felt that they were all alone and had nothing to offer the world, just like our character Andy! After this our writing prompt was this—– 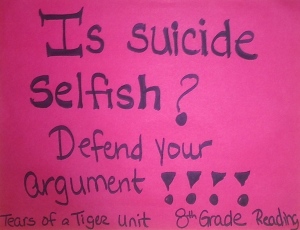 Wow!!!! This ignited a fire storm in everyone present !!!! We have tons to say about this some of us felt that it was not selfish and others did- here is one person’s perspective on the topic- ( Rough Drafts)

Here is another ( Rough Draft) 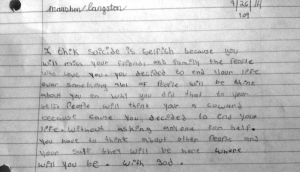 Off to a great start- right? Stay tuned for more excellent writing! Next week we will be starting our research projects about teen drinking – driving- and suicide.